Today is the national day of watermelons and of course, as it is the scent of one of our most popular fragrances, it only makes sense to tell you all the weird and wonderful facts about watermelons that we can find! So sprits on some Shay and Blue Watermelons and read all about the vegetable (spoiler alret!) that was the inspiration behind one of our best selling scents!

1. Watermelons are both a fruit and a vegetable

Thanks to their sweet taste, watermelons are most commonly considered a fruit. And they do grow like fruit, originating from flowers that have been pollinated by bees, and, from a botanical perspective, they're fruits because they contain seeds. But many gardeners think of them as vegetables, since they grow them in their gardens alongside other summer veggies like peas and corn. Not to mention, watermelon is classified as part of a botanical family of gourds that includes other culinary vegetables like cucumber, squash, and pumpkin.

2. They need a really long time to ripen

Because watermelons are native to Africa, they need hot, sunny conditions to thrive. Some varieties need up to 130 warm days to ripen. Most watermelons mature in 85 to 100 days.

To make classification a little easier, however, watermelons tend to be grouped into four main categories: seeded (or picnic), seedless, icebox (also known as mini, or personal size) and yellow/orange. One of the most popular varieties is the Crimson Sweet, a seeded melon with deep red, sweet flesh. Some of the more unusual varieties include the Golden Midget, whose rind turns yellow when it's ripe, and the Cream of Saskatchewan, whose flesh is cream-colored. 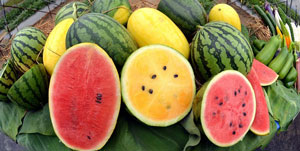 4. You can eat the whole thing

While we tend to focus on the melon’s succulent flesh, watermelon rinds are also edible—as well as full of nutrients with surprising health benefits. In China, the rinds are often stir-fried or stewed, while in the South, cooks like to pickle them. And, across the Middle East and China, the seeds are dried and roasted (similar to pumpkin seeds) to make for a light, easy snack.

5. They’re called watermelons for a reason

They’re 92 percent water, making them a perfect refresher for those hot summer months.

6. They can be seen in Egyptian tombs

Watermelons have been cultivated in Egypt for more than 5,000 years. Egyptians depicted watermelon in drawings on the walls of tombs and even left watermelon with their dead to nourish them as they journeyed through the underworld.

7. The seedless ones are not genetically engineered

Contrary to what you might have heard, seedless watermelons are the result of hybridization, a perfectly natural phenomenon that farmers can nevertheless capitalize on. A couple of decades ago, seedless watermelons were hard to find, but today they make up around 85 percent of those sold in the U.S. And those white “seeds” that you still find in your seedless slices? They’re actually empty seed coats and are perfectly safe to eat.

8. They can grow to be really, really big!

The heaviest watermelon to date was grown by Guinness World Record holder Chris Kent, of Sevierville, Tennessee, in 2013. A Carolina Cross, it weighed in at 350.5 pounds. To give you some perspective, that’s the equivalent of an NFL lineman. 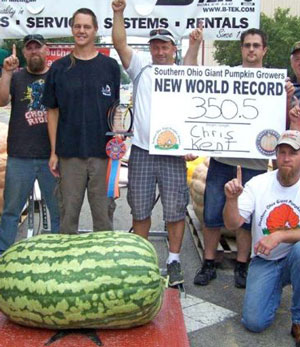 9. They can help to prevent cancer

Watermelons are a great source of lycopene, an antioxidant that’s been shown to reduce the risk of several types of cancers, including prostate, lung, and stomach.

10. The sweetness is measured on a scale

11. Farmers in Japan love to grow them in odd shapes

In Japan, farmers have been growing cube-shaped watermelons for the past 40 years, forcing them into their square shape by cultivating them in box-like braces. When the watermelon fills the cube and gets picked, it's generally not ripe yet, meaning the inedible melons are sold—for prices upwards of $100—as novelty items and gifts. (The original idea was for them to better fit into standard refrigerators.) More recently, farmers have grown watermelon in the shape of hearts—these particular melons taste as sweet as they look—as well as pyramids and human faces.

12. One family kept an heirloom variety alive for almost 100 years

The unusually sweet Bradford—created by Nathaniel Napoleon Bradford in Sumter County, South Carolina, in the 1840s—was one of the most sought-after varieties of watermelon the South has ever seen. But its soft skin made it hard to transport, and by the early 1920s it had proved to be commercially unviable. It would have disappeared completely had the Bradford family not kept it alive in their backyard gardens for multiple generations. It’s now being grown commercially again by Nat Bradford, Nathaniel’s great-great-great grandson.

13. They are the official state vegetable of Oklahoma

In 2007, the Oklahoma State Senate honored its then-14th biggest crop by voting 44–2 to make it the state vegetable. (Why not fruit? That distinction was already given to the strawberry.) Its celebrated status was threatened in 2015, however, when State Senator Nathan Dahm moved to repeal the bill based on the argument that watermelon is a fruit. Thankfully for Oklahoma’s Rush Springs, home to an annual watermelon festival and the original bill’s sponsor, then-State Representative Joe Dorman, Dahm’s bill died in committee.