The Art of Doodling

The Art of Doodling

“Everyone is a collector in one way or another,” the English-teacher-turned-art-dealer David Schulson would tell his children. “Everyone has the impulse to collect.” What Schulson didn’t say is that the impulse to collect often contains within it another: the drive to keep, to hoard, to hold on. Schulson spent his weekends trolling New York’s flea markets for oddities, searching for the stories behind strange objects, and though he often sold what he found, he couldn’t bring himself to part with some of his most treasured discoveries. Over the course of his career, he amassed arguably the most impressive private collection of drawings, scribbles, and autographs in the world. The book Scrawl: An A to Z of Famous Doodles showcases this trove of miscellany for the first time. A selection from Schulson’s collection—including Queen Victoria’s donkey doodles, Stephen King’s spookily jubilant stick figure, and an erotic painting by Tennessee Williams—appears below. 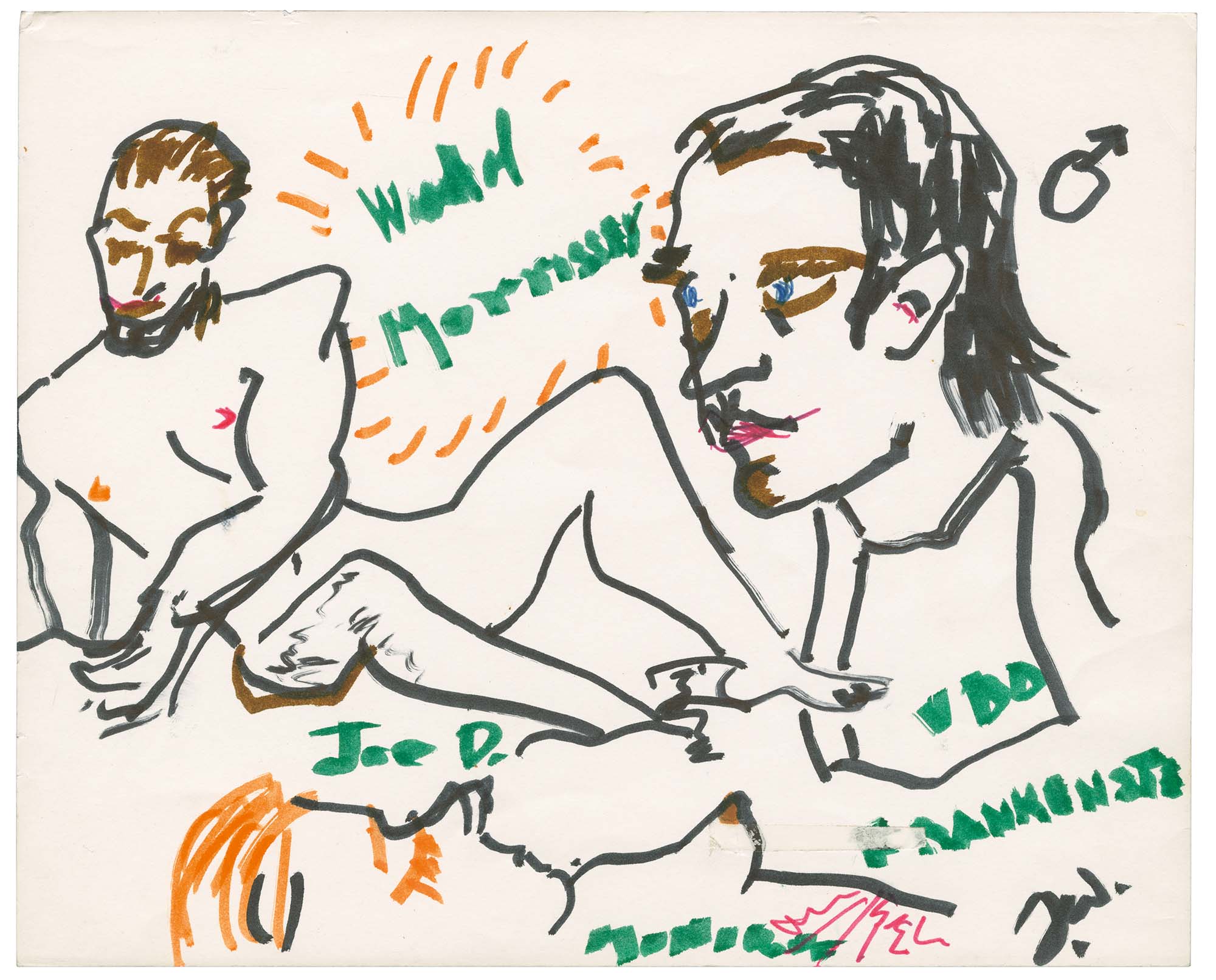 Tennessee Williams, one of the twentieth century’s most important American playwrights, also painted with oils and pastels. On the back of an eight-by-ten-inch black-and-white photograph, he painted two male figures with thick brushstrokes. Near his initials, he writes, “Frankenste[in] Monster,” and between the two figures, framed in orange, he titles the drawing World of Morrissey. This is likely a reference to the director Paul Morrissey’s 1973 horror film Flesh for Frankenstein, also known as Andy Warhol’s Frankenstein. The figure labeled “Joe D.” must therefore be Joe Dallesandro, who played a starring role in the film. Williams’s paintings tended to express his homosexuality, which was largely absent from his plays. 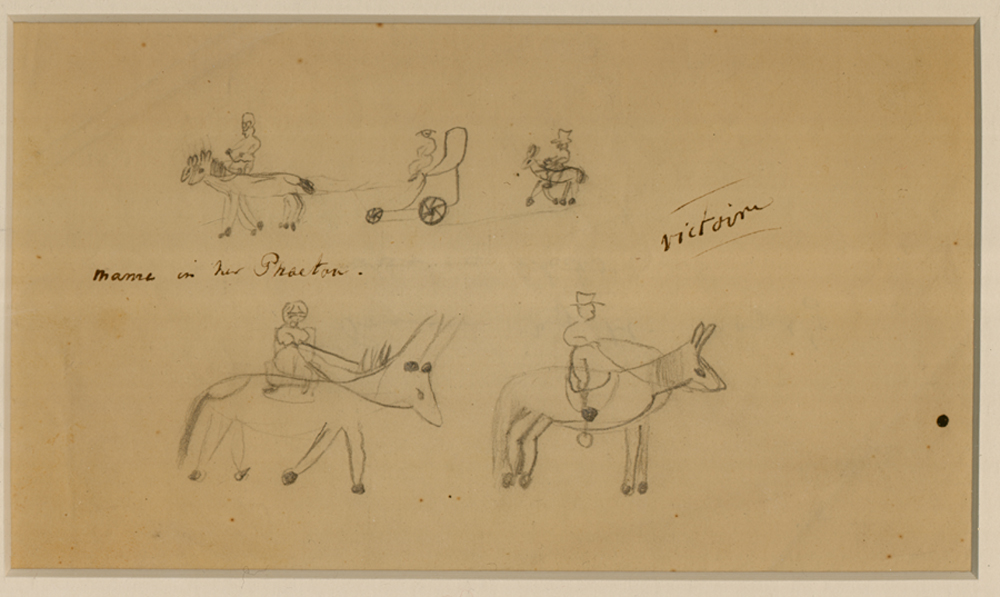 Before she became Queen of the United Kingdom of Great Britain and Ireland and Empress of India, Alexandrina Victoria was a royal princess affectionately called “Drina.” Her mother, who raised her following the death of her father in 1820, believed in the importance of outdoor activities, and that included riding; Victoria not only enjoyed riding horses, but also donkeys.

The cursive handwriting on these pencil sketches suggests she drew them when she was a young adolescent in the early 1830s. She captions the first image, “Mama in her Phaeton,” which is a horse-drawn open carriage. The drawing below the phaeton appears to depict a girl sitting in a seat on a donkey, perhaps a memory from when she was a child—it remains unclear whether this could be a very early self-portrait.

Victoria’s interest in art grew and she eventually became an accomplished watercolorist. This pencil artwork offers a fascinating glimpse into the childhood of one of the world’s most powerful women. 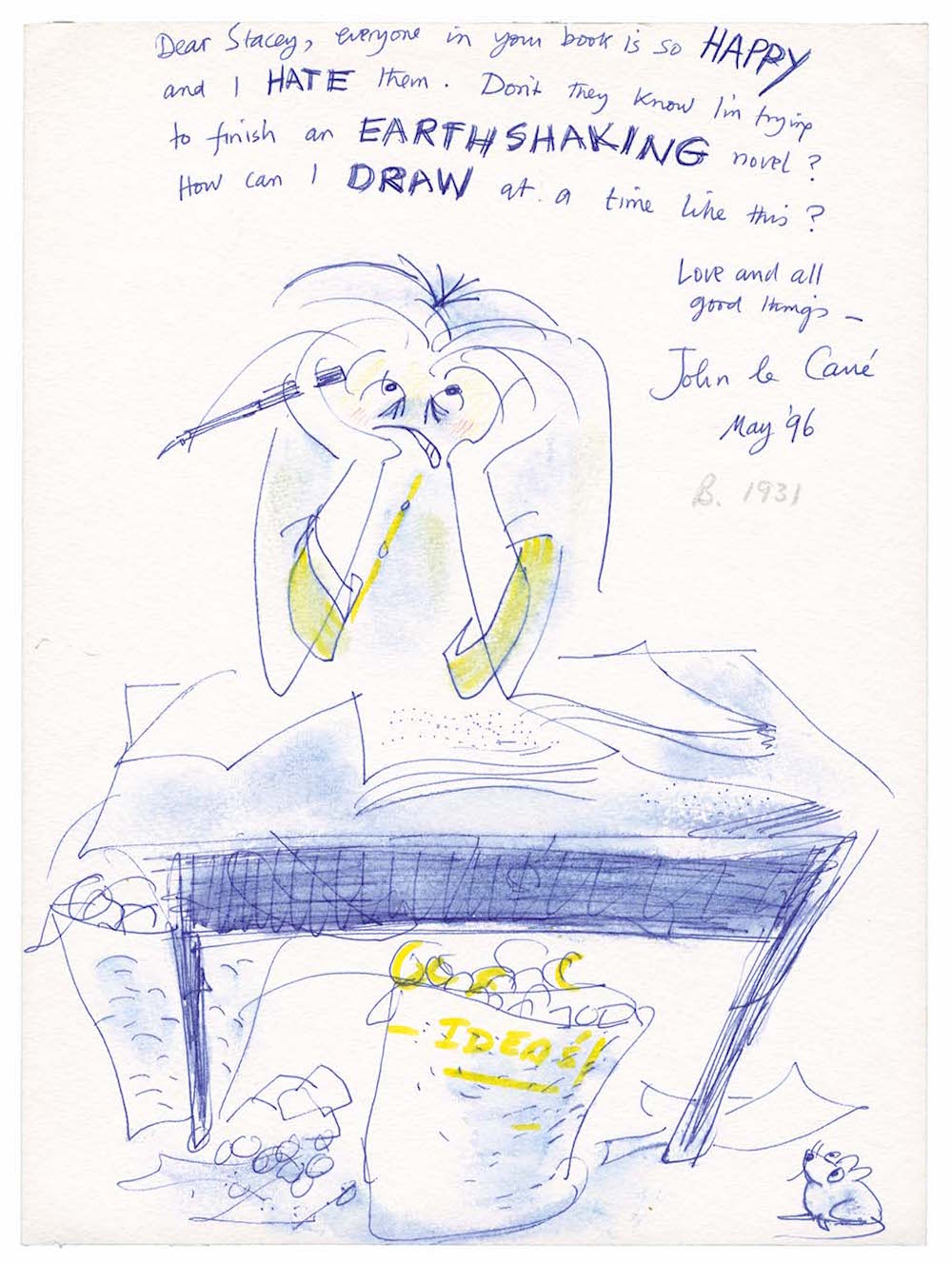 This humorous self-portrait from May 1996 depicts John le Carré struggling to “finish an EARTH SHAKING novel.” With fountain pen in hand and sitting over a jumble of pages, he clearly looks distraught, but this belies the fact that his spy novel, The Tailor of Panama, was about to be released. The image was rendered with blue ink, and perhaps wash, on eight-and-a-quarter-by-eleven-inch white card stock. 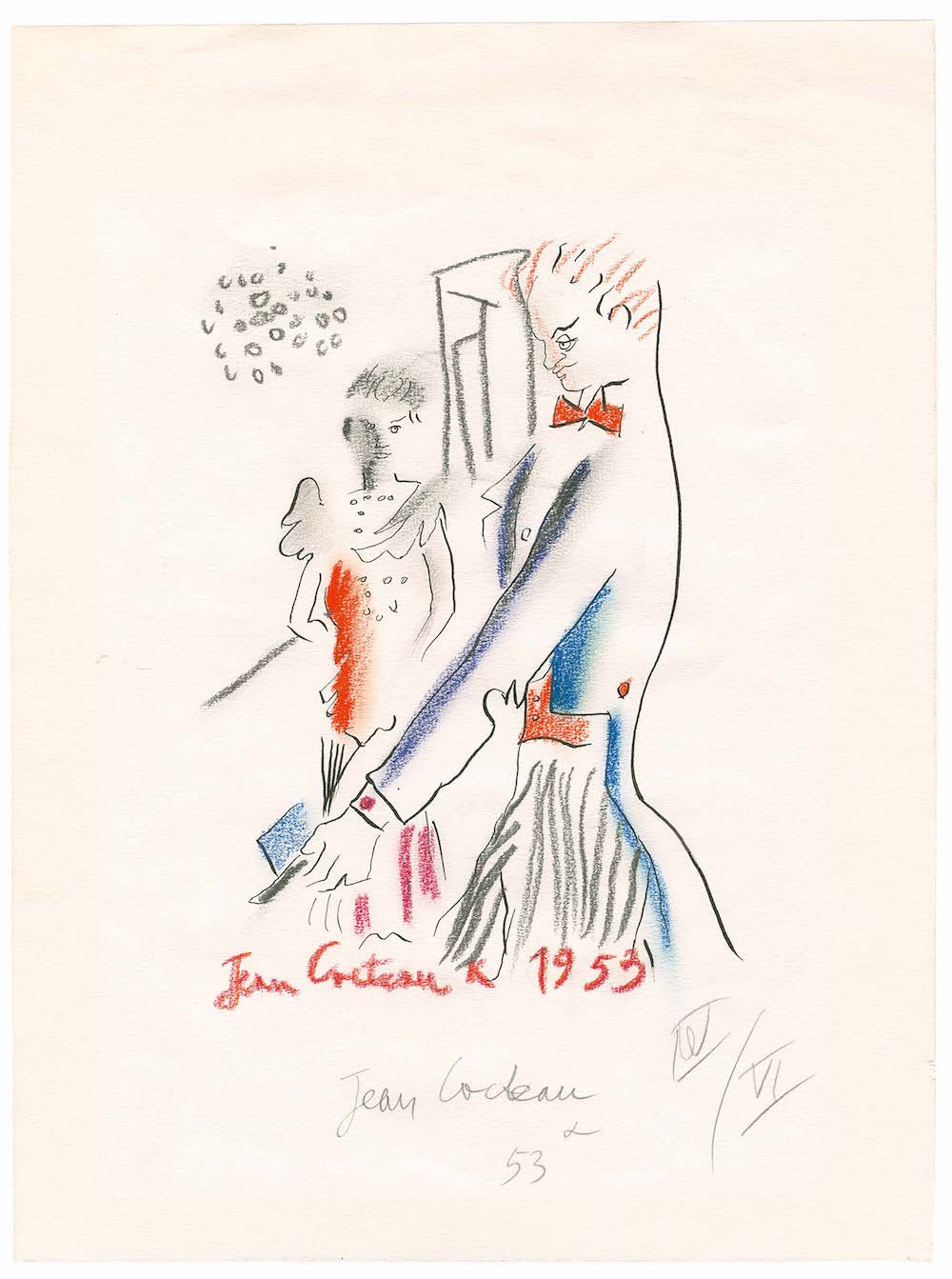 This fanciful ink-and-crayon drawing depicts Count Orgel, the protagonist of the controversial 1924 novel by Cocteau’s friend Raymond Radiguet, Le bal du Comte d’Orgel. Radiguet died a year before its release at the age of twenty. In 1953, the date Cocteau writes twice on this piece, his suite of eponymously titled etchings was published by Éditions du Rocher, Monaco; this drawing resembles the etching titled, “Le Comte d’Orgel XII,” and likely depicts both the count and the young man (facing forward) at the center of an adulterous relationship involving the count’s wife. 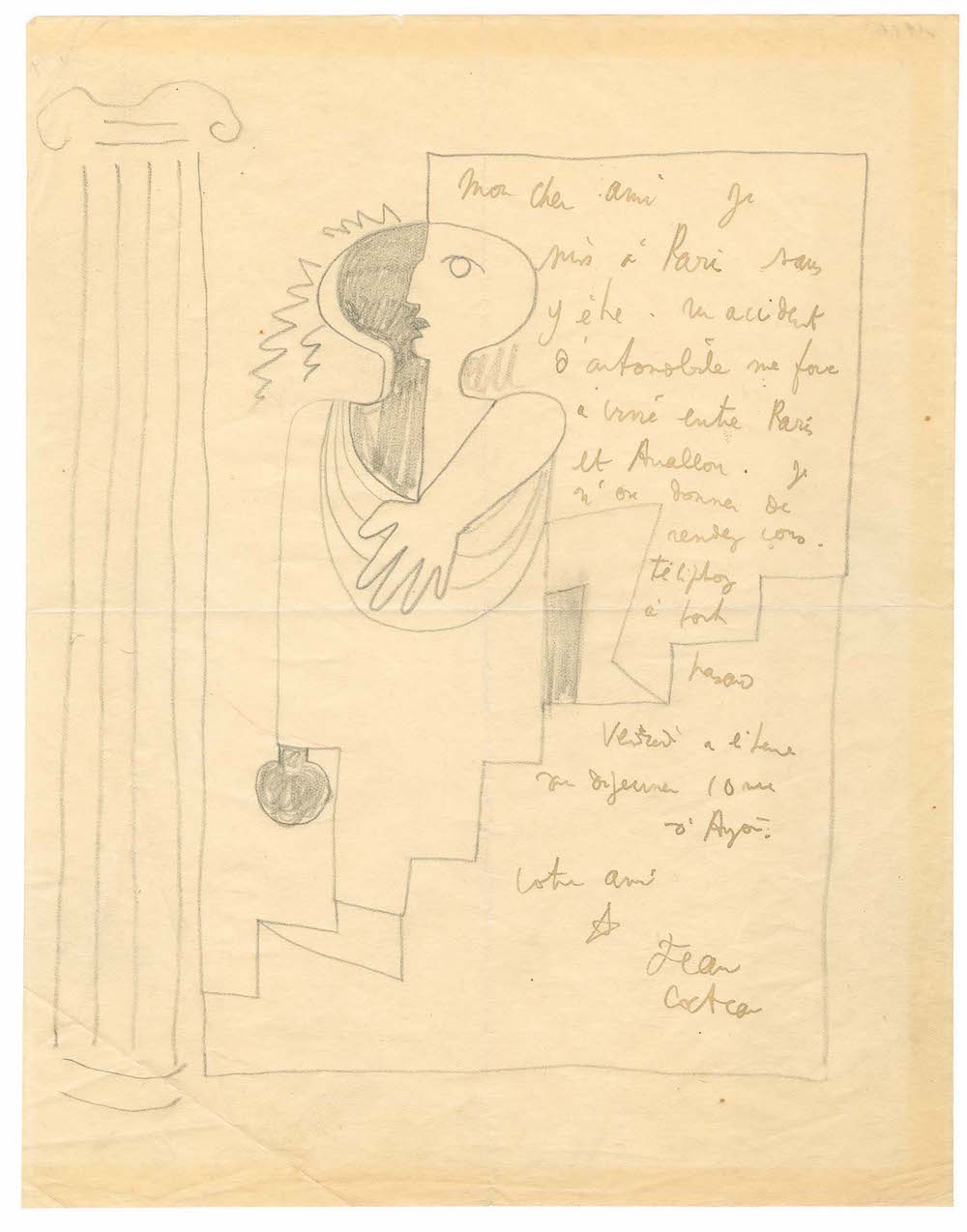 “I am in Paris without being there,” Cocteau writes, after a car accident while driving between Avallon and the capital forced him to reschedule a planned lunch date. “That’s why I can’t meet.” He illustrates his anguish after what happened, and sets a new date before drawing a little star and signing his name. 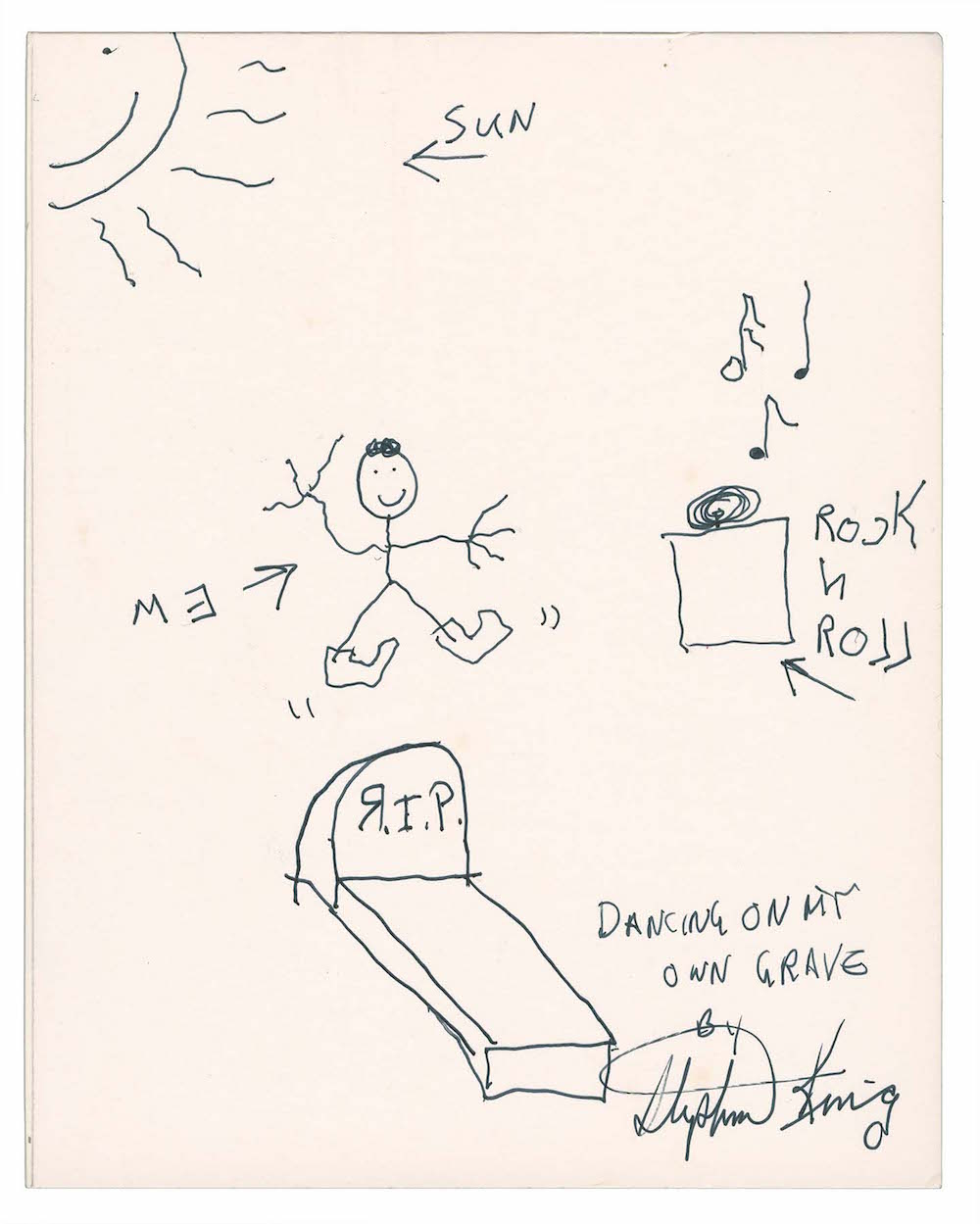 This pen-and-ink sketch seems at first to have been drawn by a child, but in the lower corner, Stephen King signs his name in expressive cursive. Its content, meanwhile, is clearly more sophisticated than meets the eye: the bed’s headboard, which is styled as a headstone, sports the abbreviation for “Rest in peace,” with the R written backward. The E in “ME” is also backward, as are the C, N, and Ls in “ROCK N ROLL.” Is there a hidden message here, or could this sketch have something to do with King’s 1979 novel The Long Walk, first published under the pseudonym Richard Bachman? In this dystopian story about teenage boys going on a forced walk until only one is left standing, one of the boys starts threatening the others, telling them he will dance on their graves. Perhaps King is echoing that threat above his signature. 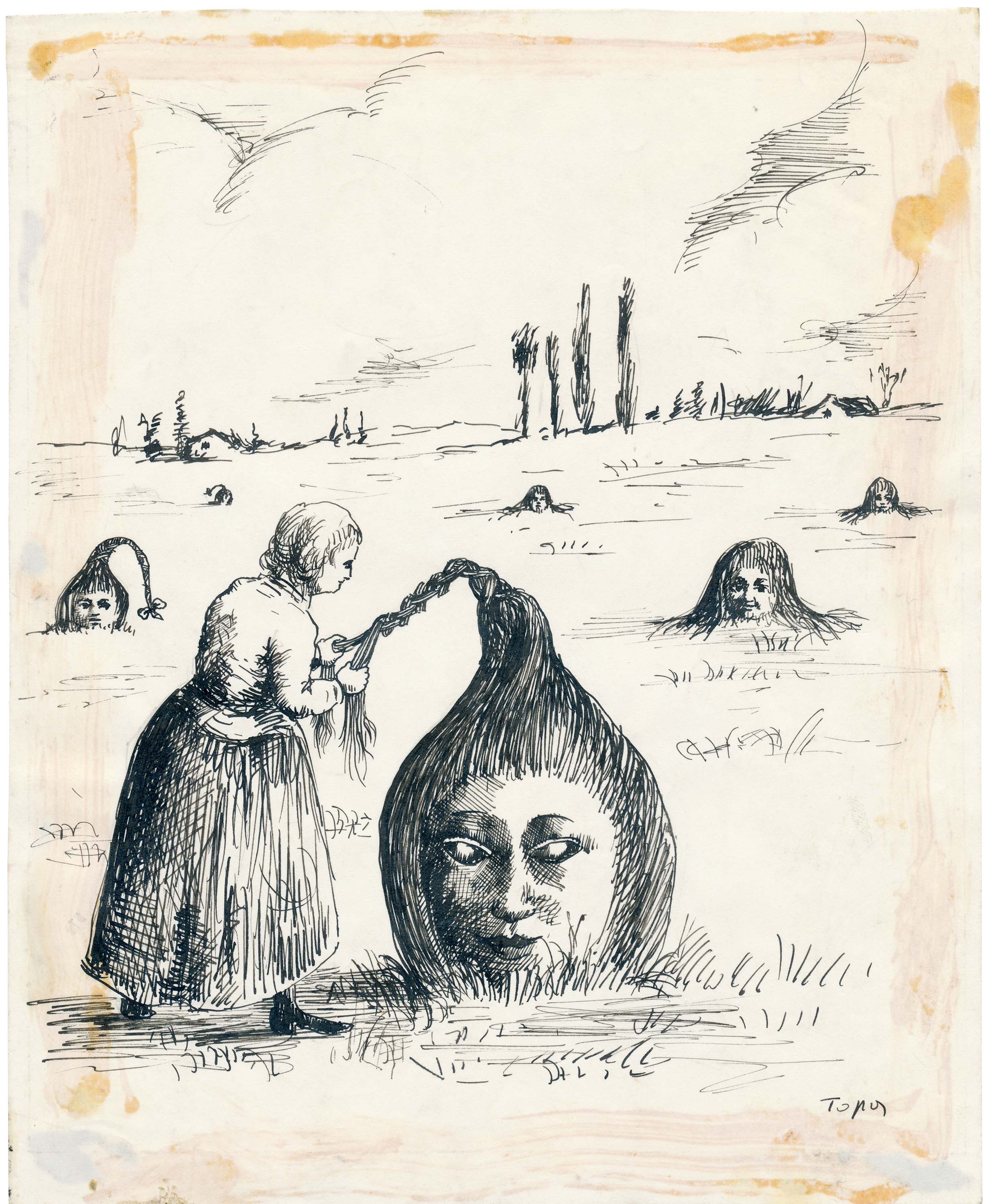 Roland Topor was best known for combining humor with the grotesque, often using the human body as a subject, either whole or in parts, as seen here. This pen-and-ink signed sketch was once glued to a board, and visible residue shows along the edges. Although the paper is not in great condition, there is something bizarrely enticing about this field of heads, whose hair is being braided for an unknown reason.