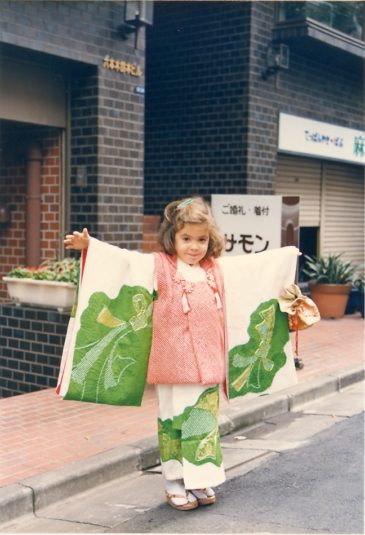 Julie Massé as a young girl in Japon

Very beginning of the 80’s – ages ago, remember, people were not travelling as much as they do today – my family moved to Tokyo for my father’s work. I was born there and lived in this city for five years. Even if we left when I was only a child, my family and I are still very much connected to Japan. I deeply love its culture and traditions. This very early experience of travelling far from France, discovering a completely new culture, has probably been instrumental in shaping my personality. 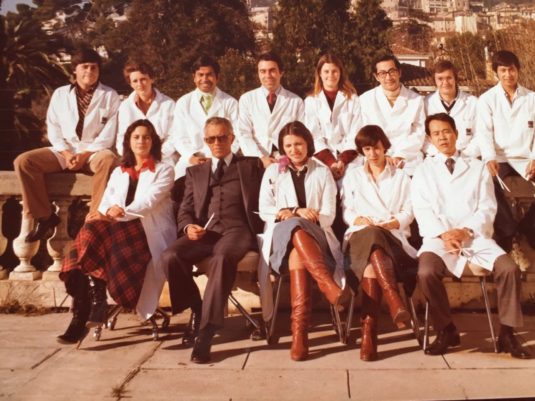 My father’s family is rooted in Grasse, and he studied at the Roure perfumery school. After his training, he decided to follow a sales career in the company, rather than creation. But his passion for naturals and scents was still very present and vivid. At home, there were always some raw materials, fragrances and blotters lying around. Since my early childhood, they have been fascinating me. I was even asking my father to create games around smells and fragrances for my friends and I liked that so much. And now I do the same for my own kids! 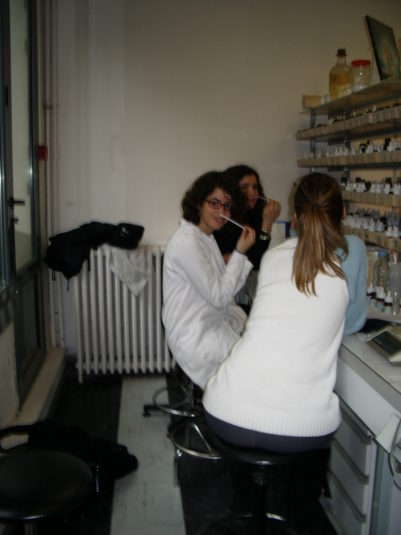 Later on, I was collecting print advertisings for perfumes, ripping out pages from glossy magazines. I had a whole wall in my bedroom that was covered with these beautiful pictures of iconic fragrances. As a child and young adult, I loved creating things with my hands: sawing, origami, fancy jewels… Transforming material into something beautiful. I wish I could have more time to do this today with my children. Joining the world of fragrances was my own choice, my own inclination. Even though growing up in an environment surrounded by fragrances guided me, it’s not just a family thing. I can’t remember since when exactly but it was obvious for me that I wanted to be a perfumer and I was determined to become one. My first goal was to enter the French perfumery school ISIPCA. So I started by studying chemistry for three years before applying. 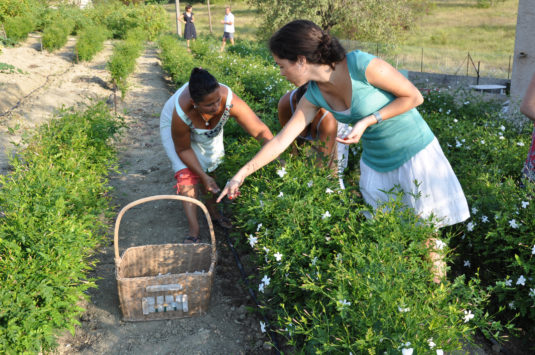 Julie in the fields of Grasse gathering jasmine

After graduation, I started my apprenticeship at Fragrance Resources as “quality controller” in Grasse. Therefore, I left Paris to live with my grandmother for two years. She used to own a bookstore, an institution called “Les Beaux Livres”. My family and I were usually in the South of France only during summer. So, it was great to spend some long time alone with her.

During these first two years in Perfumery, I met my mentor, Pierre Bourdon. At the time, he was leading the French subsidiary and French creation team of Fragrance Resources. Our first meeting was around a drink, I was so impressed. For my work, I was visiting him regularly and dreamt of asking him to be his apprentice. Before his retirement, he decided to train two new young perfumers; he picked Julien Rasquinet and myself. I remember waking up every morning thinking “I can’t believe my dream is coming true”. He was teaching me the old school way, with the traditional Jean Carle method, but with Bourdon’s own twist: classic perfumery, raw materials training, daily exercises on fragrance bases. I learned what he called “narrative perfumery”, which consists in composing a formula from scratch on paper, as if I was describing a landscape or a painting. When I was compounding one of his formulas, I was hearing crystal clear the story he wanted to tell. For three years, I had the chance to share the same office with him. People were coming to see him, and I learned a lot just by listening to what was happening. Even then, he kept on impressing me. For example, he would bring only one trial to a client’s meeting, telling them it was the one. And it worked!  Also at Fragrance Resources, Benoist Lapouza was a great teacher too. He gave me so many valuable advices that I still use in my day-to-day work. When I think of these years, it was working, training, and great fun and laughs with the whole team. 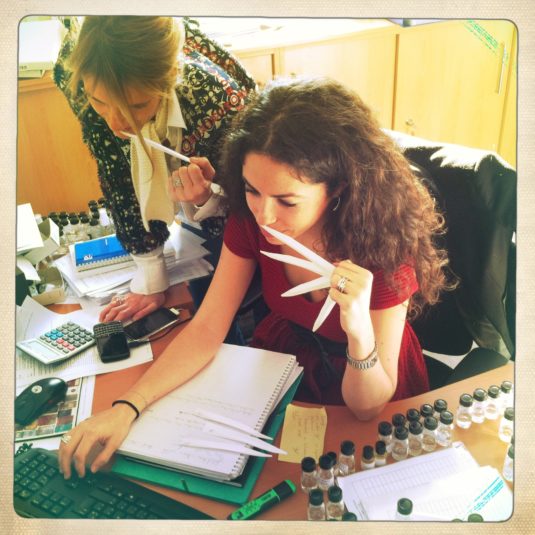 Then, I met Christine Nagel. She pushed me to be daring, to express my creativity, to develop my own personal signature. I also learned how to work in a team, which is very important in today’s perfumery, and I loved it. Christine left to work at MANE. Six months later, I joined her there. After seven years at Fragrance Resources, I met a new team of talented perfumers I love to work with. It has been great working on the Sí Armani with Christine, and more recently with Cécile Matton on Pivoine Suzhou from Armani, YSL’s 37 rue de Bellechasse and  D&G Velvet Incenso.

At MANE, we have the chance to work with great natural ingredients. We have a unique access to Grasse region’s natural ingredients local production: jasmine, rose centifolia, mimosa, etc. MANE has developed as well several exclusive partnerships with farmers to get sustainable high quality material: Vanilla, Geranium and Vetiver in Madagascar, Timur pepper in Nepal or Myrrh in Namibia. A few months ago, I visited the local raw material producers in Madagascar, it has been an amazing experience. It was so moving to track these scents back to the very beginning. It’s something that I will always remember.

Photo Madagascar. Julie in a field of Vetiver

Until today, my inspiration frequently comes from visual art: impressionism with Whistler or Monet, graphic design, Andy Warhol. My husband being an architect, I have become more aware of the composition of buildings, and of the importance of architecture in cities. Inspiration comes also from food, savory and sweet. Tasting new flavors, ingredients, and recipes in my kitchen or in restaurant, is something that I really enjoy. 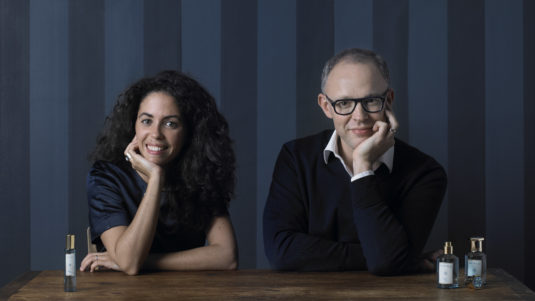 Encounters are key as well. Dom De Vetta, founder of Shay and Blue, trusts me to translate his creative vision into fragrances. It is so rare to work with a brand that gives you so much freedom. It’s exhilarating! 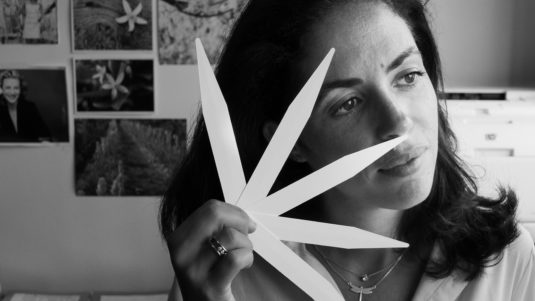 Julie Masse in her office at MANE

I love to create accords from scratch, finding contrasts and links, building up a fragrance and keeping the strength of the accord. Talking about raw materials, I have a crush for the orange tree and all its elements: from the zest of the fruit, to the floral, delicate note of the neroli or the rich honey facette of the flower absolute. I love them all and they immediately bring me back to my grandmother’s garden in Grasse that is now my mother’s. My Mediterranean roots are crucial in my life, and probably feed my creativity. As soon as I can, I visit my parents that are now living in Grasse all year long. My mother’s garden is a heaven for a perfumer, a true anthology of Mediterranean fragrant plants: rose centifolia, all kinds of geraniums, orange and lemon trees, heliotrope, aromatic herbs (sage, rosemary, thyme…), jasmine, iris, pittosporum, tuberose… It’s just magical!

In Grasse, I love to go and visit the farmers in their fields of rose, jasmine, tuberose… Talking to them, smelling the flowers, seeing people working in the field, this is the heart of my deep passion, every time it transports me. – Julie Massé, Perfumer with Mane 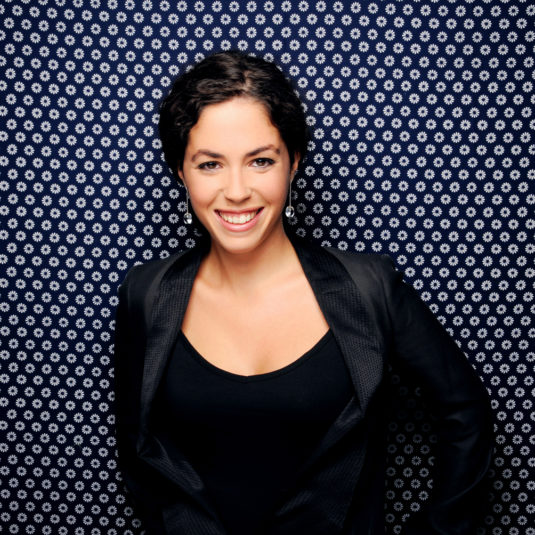